Today, around 5,700 people in the Vauban district live predominantly in low energy houses with a specific heat requirement of approx. 50-60 kWh per square meter per year. In addition, there are about 300 residential units that have a significantly lower specific heat demand (passive houses and plus energy houses). Many of the houses generate solar power on their roofs and thus contribute to a better climate balance.

Heating is also comparatively efficient via a district heating network and the generation of heat via wood and a gas-fired cogeneration plant. Until 2002, the buildings in Vauban were supplied with heat via one of the old heating stations at SUSI. Since 2002, the heat supply has been provided by a newly built cogeneration plant. Before the conversion in 2011, high-pressure steam was produced in a woodchip-fired boiler, which was converted into electricity in a steam engine. The electricity generated was fed directly into the low-voltage grid. This steam engine was prone to failure and was therefore replaced in 2010/2001 by a gas engine CHP (Combined heat and power) with an electrical power of 850 kW and a thermal power of 1,150 kW. In addition, the chimney system was renewed, integrating a buffer tank with a volume of 100m³, and a heat pump with a capacity of 140 kWth installed. The plant achieved a record overall efficiency of more than 96%. Table: Figures to the CHP in Vauan 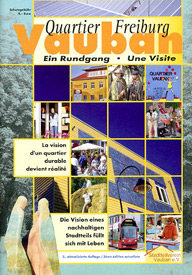